How to Make Grapevine Baskets for the Home

Grapevine Baskets
Asheville, North Carolina basketry artist Matt Tommey has been making grapevine baskets for over 20 years now.  Based at this studio in Asheville's River Arts District, less than a mile from the entrance to the Biltmore Estate, Matt harvests and prepares locally available wild and cultivated vines for his unique grapevine baskets.

Many times when people think of grapevine baskets, it conjures up images of an afternoon in the woods harvest vines for a wreath or really rustic basket.  However, Matt's taken his use of grapevine and other southern invasive plant species to the next level, creating his beautiful one-of-a-kind grapevine baskets using a combination of twining and random weave basketry techniques.  This makes for a very strong basket as well as one that is visually appealing to the eye as a sculptural piece.

Grapevine Baskets
Not all vines are created equally when it comes to creating beautifully handcrafted grapevine baskets.  Over the years, Matt has determined the best types of grapevines suited for weaving.  His favorite grapevines by far are the chardonnay vines from the Biltmore vineyard.  They are strong, hearty vines with a white, speckled bark.  When mixed with other more rustic grapevines they give an incredible contrast.  Other types of cultivated vines that Matt uses include muscadine and scuppernong vines.  These vines are typically small and thin with a very woody consistency.  Perfect for random weaving and nest baskets. 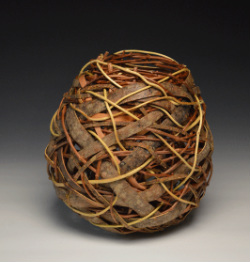 Grapevine Baskets
When using wild or cultivated vines for making grapevine baskets, it's important to remember that these are natural materials that need to be prepared properly before weaving and bringing the finished product in doors.  To prepare vines for grapevine baskets, Matt carefully removes the bark and any extraneous tendrils not desired for the finished product.  He coils the vines and boils them for about  20 minutes on a rolling build to soften the vines in preparation for weaving. Once done, he removes the bark and begins to weave with the vines.  This same technique of boiling and removing the bark goes for honeysuckle vines as well.  While weaving, Matt incorporates additional vines and bark into the grapevine baskets.  Upon completion of the basket, it is set in the sun to dry naturally.  Once completely dried, Matt singes the basket with fire to remove any additional extraneous fibers and then seals it with a light polyurethane finish.

To see other grapevine baskets available for purchase from Matt Tommey, please visit our current inventory.