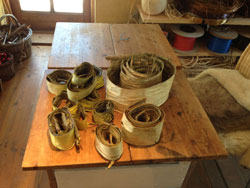 I’ve been a basketmaker now for almost 20 years, focusing mostly on traditional Appalachian designs using kudzu and other natural materials I harvest here in the southeastern United States. Last summer, as a board member for the National Basketry Organization, I was invited to be a part of the US delegation attending the International Wickerwork Festival in Nowy Tomysl, Poland. While there, my eyes were opened to the vast expanse of basketry work being done with natural materials around the world, specifically in Scandinavia. The work of one of the other attendees in particular caught my attention, Ane Lyngsgaard. (Ane Lyngsgaard is a Danish basketmaker who works primarily in willow, bark and a variety of recycled materials like metal and rubber. She’s a highly respected teacher, talented artist and former president of the Danish basketmakers association, representing over 1000 makers.) I was so taken with Ane’s baskets that I made a promise to myself then to take a class with her in Denmark as quickly as possible. I immediately came home and wrote 2 grants to the North Carolina Arts Council and the Southern Highland Craft Guild, of which I’m a member, and was awarded a combined $1700 to take a class with Ane at her studio south of Aarhus, Denmark June 2-9, 2012.

I arrived in Denmark on Saturday June 2, one day before the official class began. That gave me time to not only adjust to the time difference, but I also got to spend some time with Ane and our other instructor Marienne Mortenson harvesting, peeling and preparing willow bark for the class. I had worked with bark before but this gave me the inside scoop on how they did it, in particular, how to score, peel and roll the bark for drying. Spending the afternoon in a large willow field with so many different varieties, colors and textures of willow bark was really exciting!

On Sunday, other participants from around Europe began arriving at the studio. Let me pause here and say this was one of the most incredible studio’s I’ve ever visited. Ane and her husband Kurt purchased and renovated an early 20th century Dairy which now contains living space for their family, multiple workshops, teaching center, studio, gallery and bedrooms for class participants. If you’re familiar with the Folk School concept (which spawned our Settlement School Movement in the US), which was started in Denmark, their facility is of that same vein – community living, eating and teaching around art and craft.

Each day during the 6-day class, we focused on a different bark technique including straight and bias plaiting, twining, hex and a variety of different rims and decorative stitches. One of my favorite days was Wednesday when the instructors gave us a large piece of really knotty bark that had been soaked in an iron bath (turns the bark a blue/black) and told us we had 30 minutes to complete a piece. This was a big challenge for many in the class but it really forced me to think quickly and execute an idea with out getting caught up in all the details of the finer weaving we had done all week.

By the end of the week, everyone had completed 8-10 pieces including pouches, trays, bags, round, square and sculptural baskets. My only problem was figuring out how to get them all home!

The last day of my trip to Denmark, I was privileged to visit Vissinggaard, the home, studio and basketry museum of well-known Danish basketmaker Eva Seidenfaden. There we toured Eva’s basketry museum, featuring hundreds of baskets from some of the best makers around the world. We ended our day browsing the extensive basketry library and eating lunch in the grand dining room with several Norwegian students who were attending a weekend class.

My time in Denmark was much more than just learning new techniques. It was about making new friends, experiencing the culture and soaking up the design aesthetic of the natural materials work that’s done in Europe and Scandinavia. I took almost 400 images that will continue to be a source of inspiration for me for years to come. Lastly I came back with a renewed vision for my own work and a passion for teaching and creative community among likeminded artists. I can’t wait to share my new knowledge with other artists in my studio and as I teach around the country.